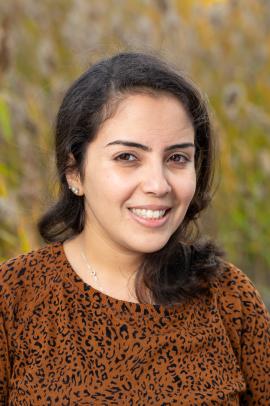 Mai completed her master’s degree in Envirofood: Environmental Protection and Agricultural Food Production at Hohenheim University in Germany. Prior to this, she earned a double bachelor’s degree in nutrition and dietetics and psychology, with a minor in sociology, at Birzeit University in Palestine. She is interested in the interaction among individuals, food availability, modes of production, and society along with how this can lead to sustainable development and resilience within societies. This drove her to write her Master thesis about a related topic, which titled “The Role of Alternative Food Networks (AFNs) in Contributing to Food Sovereignty in West Bank, Palestine”.  Mai has a passion of research this led her to gain an extensive experience as a research assistance in several and multidisciplinary projects. In 2013 (June-September), she worked as a research assistant at Arab World for Research and Development (AWRAD) in Ramallah-Palestine. During her master’s degree studies, she worked as a student assistant in the Institute of Biological Chemistry and Nutritional Science at University of Hohenheim on a project called “Food Habits and Nutritional Status of Asylum Seekers Living in Accommodations Supervised by Caritas in Stuttgart, Germany.” In 2017 and 2018, she worked for several months as a scientific assistance in connection with a project entitled “Social conditions of food-related well-being in times of crisis: A study on refugees and their role as knowledge brokers”. Additionally, in 2018 (April-June) she worked as a research assistance at the SME institute,  university of Mannheim, Germany in a project entitled “working in Germany” for the ministry of social affairs and integration in Baden-Württemberg.

Urban agroecology is emerging as a specific type of urban agriculture, which goes beyond food production in an urban environment to include how food, water, energy is produced and how resources are distributed, shared in a just way. Urban agroecological practices go further to how they change normal and unresourceful day to day activity. Its main goal is to increase awareness among urban citizens about their way of eating and living, also encouraging the citizens to value their food and related knowledge, which enabling them to recall and reproduce their knowledge among generations and across cultures. The project aims at understanding the impact of urban agroecological practices on transition into motherhood in respect to: recalling and reproducing food related knowledge, healthy eating and wellbeing and change in relations of care in respect to body nourishment. A qualitative research design will be carried out and the target group will pregnant women and/or women with children up to 2 years old in Coventry, UK.