Act 1: All the roads lead to Luvia or how the zoom platform meets authentic cottage life

A follow-up piece of our two RECOMS fellows, Viola and Ruben about their experiences during the online training event 5.  In the prologue of the “RECOMS goes online” saga, the fellows told about how the Finnish team was going to find a remedy to the fact that the fifth RECOMS training was going to happen online, however they did not disclose any details of the what, the how and the where, leaving the readers on tenterhooks. And the reality is, there is a lot more to be told. ​ 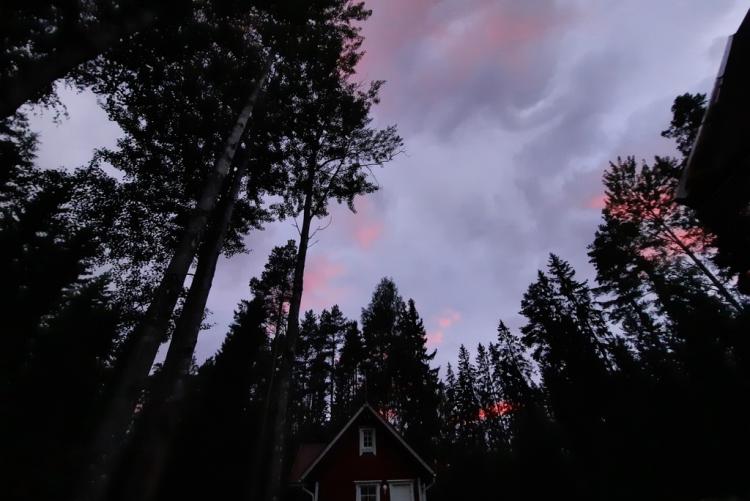 by Viola and Ruben

Being left without the option of leaving the country, we decided to go the Finnish way: rent a mökki (a cottage in the countryside, often the second or third or fourth house, with surrounding forests of about the size of Luxembourg and very, very, very few or preferably no neighbors. Occasionally, it may have a toilet with running water), get groceries for 2 weeks and disappear from society.

The readers should know that, despite the not so broad variety of stereotypical summer places in a country like Finland, deciding where to go was not an easy choice. First, time was a bit tight. For months we knew we would eventually have to organise for the training, but if this whole pandemic has taught us something is that, in 2020, procrastination is the best way to make sure things go as you planned. Second, after having postponed decisions as only two masters of procrastination can do, we found out that actually the training was going to happen during peak holiday season in Finland. Plus, add that we were looking for a place with reliable internet connection and accepting dogs (more on the dog to come in the next blog posts), options were shrinking like woolen pullovers in a too-hot laundry.

Given all these limiting factors, we ended up with having to decide between 2 locations: the Kuopio region, Savo, land of the kalakukko (the “fish rooster” is quite a crazy thing whose taste can be described only with onomatopoeias like “sgrunf” or “groll”); and the south-west coast, with sandy beaches that make you feel you could be in Tunisia if it only wasn’t for the gentle summer breeze that would get penguins to wear scarfs. And so, the final burdensome decision had to be made.

You may be wondering Did they decide based on the food scene (kalakukko-sgrunf-groll-groll)? or Was the Mediterranean-like coast a decisive factor? but reality is, dear reader, that you should remember the setting in which this is happening. Finland is probably the most brutally realistic country in the continent. Here decisions are taken based on the pragmatism you would expect from people that have to spend nine months a year in winter conditions. Therefore, here is how we decided in three simple steps:

2.    See where mosquitos are thriving this year

That’s how we ended up in a godforsaken place called Luvia, close to the west coast, far from mosquitos flocks.

Whereas for the Finns the mökki life comes with breastmilk (a Finnish expression meaning that something is very familiar from the early childhood, if you’re wondering), for an Italian the mökki idyll can be harder to grasp. For example, a wine bottle opener is not a standard item in a mökki - perhaps not in the whole Luvia judging by the supply of kitchen ware in the local stores (Editor’s note: “when is civilisation going to hit this land?”). But never mind, in full RECOMS spirit, we came up with the most resourceful solution for overcoming the lack of opener (see picture below). Also, did we already mention the mosquitos (yes, still few lazy and fat ones around even in the West), an interior design that makes you feel in a dollhouse and the seasoned humid smell of a real mökki? We are sure you can imagine the setting, dear reader.

Once again when dark clouds started to gather on the horizon (not just metaphorically speaking), what did the two persistent fellows do? They set the Finnish survival attitude mode ON. And naturally, they also set the sauna ON. Life cannot bring any troubles sauna cannot wash away - or can it?

Stay tuned for the Act 2: Finnish summer strikes back.